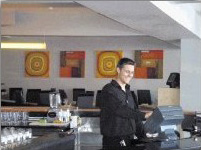 Roberto (not De Niro) was waiting, talking Italian. He showed us to our table and led us through the menu, rattling off all the melanzanes and rotolos and radicchios with the indigenous skill of the Lazio-born and then said, in English, “Close your eyes and you could be in Rome”.

Well, not quite, Roberto. We could see Table Mountain and a harbour-full of boats, not Seven Hills and the Colosseum, but he had a point. The Italian around the corner in South Africa is usually a cheap and cheerful spag bol and pizza joint with pre-prepared tomato sauces that are about as far from Naples as they are from Neapolitan ice cream. Meloncino is not cheap but it’s cheerful and choice and enchanting and generally all-round damned Italian and the chef trained in Rome. So it’s close.

Everywhere else had been full. We had staggered around the waterfront under Cape Town’s Mediterranean evening sun for hours trying to find something that wasn’t fast food or Greek and wasn’t already overbooked. It was a Friday at the height of the season and we hadn’t reserved anywhere. Queues had formed outside all the popular eateries and we were just about to head out to the Southern Suburbs and try our chances there when Meloncino hove into view where the Sports Cafe used to be, at the top of the steps next to the Chinese. And it was empty.

Roberto was supplanted by Tapiwa, a Zambian property studies student at UCT whose grasp of Italian pronunciation was as good as Roberto’s but whose English was better. Dazzled by the backdrop of the funky bar with its oranges and reds, and its multiple empty bottles and white sofas, I ordered an antipasti misti and a beef fillet with rosemary mash and then fell down the step trying to get to the loo, where I planned to admire its fine imported Italian fittings. No injury was sustained but my stern words to a passing waiter. “Someone’s going to go a nasty purler there after a couple of Peponis” will, I hope, save a few lives.

The food was faultless. Nobody asked me how I’d like my fillet, which is generally a bad sign in a bad restaurant and a good sign in a good one. It arrived a perfect rare-to-medium-rare. This was a good restaurant. The preceding starter had offered a fascinating assortment and the succeeding Tiramisu was layered with imported Italian Mascarpone. It was world-class and accompanied by a glass of Asara Noble Late Harvest which made the step on the way to the loo even less visible.

So why was the place empty, when everyone was so capable and the food so fine?

“We’ve only been open three days and the first two were for family only,” explained Tapiwa. Picture the scene. All those Capetonian Italian restaurateur families descending for two days on Meloncino’s staff to ensure that they are ready for opening.

Cape Town’s Cosa Nostra, all named Joe or Tommy, ordering a Tagliolini al Salmone and another Peponi, telling them to make it snappy and threatening to blow their and their families’ arms off if the beer’s not cold enough.

Well, it has worked. Meloncino is excellent. And obviously, as Roberto had helpfully pointed out, if you closed your eyes, you might be in Rome, not Sicily, so the Mafia are not involved, but everyone that is involved is doing a really good job. We were privileged to have eaten with them on the first day they admitted non-Italians and as far as I am concerned they and their families are safe.

Chris Harvie paid his own way and received no discount or incentive from this restaurant.