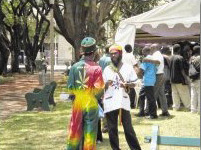 Chris Harvie travels to the Zimbabwean capital where dollar millionaires can barely afford to buy bread, but keep on smiling anyway.

This wasn’t Johannesburg, was it? We arrived at a completed, modern international airport with friendly, efficient customs and immigration officers and driveable trolleys. The lights were all working, the people were smiling, there wasn’t a police car in sight and the streets were clean.

Harare means ‘it never sleeps’. Like New York, then. On boarding the plane, we had been told to fill in forms marked ‘Immigration to Zimbabwe’. But we weren’t immigrating, we said. He just smiled.

The Crowne Plaza Monomotapa is one of the country’s great hotels. We had booked three nights. Why? It’s a long story but, in brief, a BMW was stolen from me four years ago and it had turned up. The SAPS had found it in Zimbabwe, persuaded the jolly old ZRP to lock up the driver and asked me to come along and prove it was mine.

People came out of everywhere when we arrived at the hotel. Good evening, sir. Welcome. Good evening. Thank you for staying with us. Welcome.

It was 10.30pm . I had met a member of the hotel’s staff on the flight after accidentally dropping a contact lens on her.

The booking system was down. Like the phones. I had been trying to phone a friend in Harare for two months with no success so I could sympathise, but the upshot now was that there wasn’t a room for us. It was 11pm. Would we like a drink? Oh yes, we would. “Two J&B and sodas, please.”

Our fellow passenger was exhausted, but she strode around in a knee-length cream coat with a handbag over her arm, looking every bit like the Queen on a walkabout, until she was satisfied that we would be all right.

Eventually the duty manager arranged a road-scraping taxi to take us, for one night only, to the Holiday Inn, where room service was offering curried chicken or beef stew so we nipped over the road for pizza. Z1650000 for a Margarita. That’s R356. Or R40 on the so-called ‘parallel’ rate. Everything, including petrol, is linked to the parallel rate. Every store has a banknote-counting machine. The wad to buy the pizza was a centimetre thick. In the evenings, the petrol station housing Pizza Inn and Steers turns into an open-sided music club with a working petrol pump. The shop sells mineral water and its remaining shelves are piled up with hundreds of thousands of condoms. The customers, children among them, were singing a song called Happy Days.

The night manager asked why we hadn’t got pizza. We told him we had it in a bag as there were no boxes. “Oh, Zimbabwe!” he wailed. We didn’t think it mattered as much as he did. Room service brought two Zimbabwean whiskies. The guest information is in English, French and German. If you want a different hardness of pillow, please call reception. Had I phoned, I was later told, and asked for a softer pillow, they’d have brought me one.

There was an outlandish normality to the place. A broken mirror in the lift was fixed in the morning. Room Service trays with empty plates lined the corridors, the curried chicken or beef stew had been popular. Signs advertised a Wi-fi connection. The rooms had television with DStv and the latest Dish magazine.

Vivid, freshly-squeezed juices, fruit salad, cereals, eggs, bacon, sausages, and fried brinjals made for a spectacular breakfast buffet. A truck pulled up after breakfast and off-loaded crates of fruit and vegetables, carefully covered, from the hotel’s own farm.

The Police Headquarters and Training College entertained us in a variety of flaky offices, for six hours. We gave painstaking statements, waited for them to be typed up, waited for the photocopier to work, waited for the police vehicle with fuel to return so that they could go and fetch the police photographer. And yes, it was definitely our vehicle.

Room after room was lined with well-thumbed peeling files and on the walls were reams of statistics showing that Zimbabwe’s crime figures are about one-tenth of South Africa’s for everything except Illegal Border Crossing. Bags of sugar beans lie in every corner. The front page of the newspaper carries an advertisement: Wanted for cash, Sugar beans. Will pay 550 million per ton.

We had lunch at The Aquarium Bar in the Monomotapa. It was a sea of fish and smiling faces with a choice of curried chicken and beef stew. We had a few cold Zambezis, dusty work, this sleuthing, and took a walk in the rain through Harare Gardens with its manicured lawns and tidy flowerbeds.

“It’s so nice to see you. We don’t see many people like you.” Not just one person said it. Everybody did. It is a most unusual experience for a white South African to be swamped by black faces saying it was nice to see us. It was great to be there, we said. We barely saw another white face in three days.

All the rooms at the Monomotapa have every imaginable five-star facility and huge views to the north over the park. The staff are so attentive and courteous that they would have been snapped up by the diplomatic corps in any other country in the world.

Le Francais is the hotel’s Brasserie. Our waistcoated dinner waiter assured us that everything was available. We ordered a bottle of the Mukuyu Cabernet Merlot. When the choice is Z2000000 for local or Z15000000 for South African, the Zimbabwean wine is suddenly very appealing and it is really very good if you like your Cabernet Merlot to taste like a Pinot Noir (which I do).

We chose the crocodile and the chicken but by the time the waiter came back both were off, as was the steak, so the choice was now rather more limited. Everything is available in Zimbabwe. There’s just not very much of anything.

The bream was superb and so was the pork. With the fleur de lys on the wallpaper, the panelling and the padded tablecloths we could have been in The Carlton in days of yore. In the face of adversity, Zimbabwe tries its damnedest, whereas maybe South Africa gives up and makes excuses too easily.

Drinking like the proverbial, back in the Aquarium, with a number of Zambezis and two bottles of Mukuyu under our ever-tightening belts, we had another Zambezi and then another one and fell into a discussion about student riots with a chap who gave us a CD on the subject, which we deliberately lost out of fear. We then fell deeper in with a far less serious crowd and ended up clubbing until 4am at Room 10, in Borrowdale, only a couple of hundred metres from where Mugabe lives. Loud music, endless quarts of Castle and the usual nonsense. But no politics. There is no beer shortage, after all.

Passing through Africa Unity Square on the way to The Meikles for a lunch of chicken sandwiches or chicken sandwiches, a Rastafarian concert was under way. It all seemed so normal but for the fact that this place had once been filled with bustling stalls, they had all been removed in the recent clean- up. A driver then took us out to Epworth Balancing Rocks. There were very few shacks to be seen but maybe they’d all been cleared away as well. We stopped to see if there was food in the supermarket. No milk, no sugar, no meat, but yes, there was food. Expensive food.

It isn’t only the rocks that are balancing in Zimbabwe. Everything is. The place is just ticking along, waiting to explode with investment, development and productivity. Soon. When the time comes. When everything changes. Nobody talks about what it is that needs to change. But everybody knows.

Dinner at Amanzi in the Northern Suburbs was one of the best meals of my life. We sat outside on a terrace in a rock garden with water pumping in and out of its cycads; only the hum of the generator reminded us that we were in Harare.

A blend of West African, local and Eastern cuisine with swish service. A platter of delicious tastes from the chef including kofta with hummus, chicken satay, bream in a ginger sauce, duck wonton. A mouth-melting cauliflower and Parmesan soup with a pear compote. Chicken in a groundnut and chilli sauce. An exemplary white chocolate mousse.

In the background we heard a series of explosions. It must have been thus in the Bush War, we imagined; but this was November 3 and they were celebrating, two days early, an attempt to overthrow a government in faraway England in 1605. We couldn’t help wondering what the celebrations might be like when … well, never mind. Let’s just keep everything going until then.

I am not immigrating to Zimbabwe, not yet, but as our plane’s wheels had hit the ground in Harare three days earlier, the Zimbabwean lady to whom my contact lens had become attached had said to me, simply: “I love this country.”