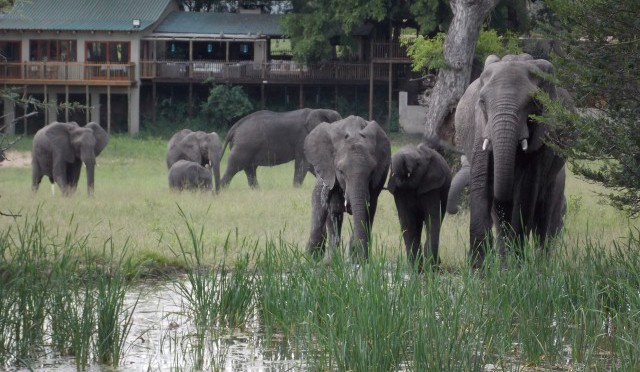 From the shaded wooden deck, we look out over a gentle upward slope studded with giant trees. A pair of cud-chewing buffalos lie next to a distant termite mound, vervet monkeys squabble in the trees and the chatter of starlings floats on the warm afternoon air.

We arrived at Notten’s Bush Camp only ten minutes ago, and after a welcoming hug – this is a friendly place, after all, and I am a returning guest – we are stretched out, beer in hand on a watchtower upper platform, contemplating and feeling very much a part of the Bushveld scene.

Notten’s is one of the oldest lodges of its kind and it is family-run. We’ve been greeted by a Notten and served a drink by a Notten. We are to be taken on a game drive by Joseph Mathebula, a local Shangaan who has been driving here for thirty years and some of whose children work alongside him. He is almost more Notten than the Nottens.

We have barely left the lodge in Joe’s Land Rover when we become embroiled in a cameo performance by a breeding herd of elephant at a small waterhole, distant trumpeting giving away the presence of another group a couple of hundred metres away. As they line up to drink, despite the greying light and with the camp perfectly poised in the background, our fellow guests click cameras and gasp with ratcheted excitement.

To say that Joe is a character is a ludicrous underestimation.  His broad smile and jaunty enthusiasm are as catching as the thorns on the bushes through which he drags his guests. He knows the area better than the back of his hand; the hand on which he will later gently perch a chameleon and break open elephant dung to show the grass content.

Joe is a local legend, dating back more than half a lifetime. He is the Skukuza Methuselah; one of the most respected trackers in the region. Everyone tunes into the radio as he unearths a female leopard and we bump off the road in pursuit, through what he calls, in the Sabi Sand’s quasi-Shangaan vernacular, the ‘makhulu hlathini’ (deep bush).

Joe and his colleague Median are a well-oiled telepathic team, bundling us from one sighting to the next, from deep ‘hlathini’ and herds of half-hidden impala littered with newly-born lambs, to the open veld, where three behemoth rhinos lumber about directly in front of us.

Alighting on a knoll to pour us a drink, Joe continues with his colourful and occasionally over-vivid stories from his years in the ‘Sands’. He tells tantalising tales of brushes with long-toothed leopards and angry elephants; he laughs at the young upstart rangers and fondly remembers long-gone colleagues. A couple of calm kudu browsing in the near distance ignore our wine-filled intrusion. Beyond them a family group of woolly waterbuck meanders obliviously across the plain.

As night falls and the bushbaby starts to call, we make our way back onto the vehicle and slowly back to camp. The elephants and the darkness have blended into invisibility; our leopard has long disappeared into the night. In the deep distance, the roar of a lion breaks the stillness.

Paraffin lights and burning torches show the paths to our rooms, themselves lighted by the glow of burning lamps. Notten’s has no electric light in the rooms; it’s a welcome relief for night-accustomed eyes not to be bombarded by the brightness of modernity as we hurriedly shower and change for dinner.

The lodge’s rooms are blissfully devoid of the usual cliché trappings of bush décor. There’s no leopard-skin or zebra-stripe; no overwhelming insurgence of khaki. Ours is spacious and furnished in light pastels. The bathroom is modern with clean finishes, a deep bath and the choice of an inside or outside shower.

Our favourite spot is the covered deck outside with its two sunbeds. We collapse on them briefly before dinner and vow to return to them afterwards.

The lunch before the game drive – a spectacular sprawl of salads, quiches, cold meats and cheeses – had filled us up at the time but left us with high hopes for dinner which are more than met. Comparing sighting notes over a pre-prandial glass of wine, we are enthralled by the conviviality of Notten’s; cheerful smiling faces rise and fall in the light cast by the dancing flames of the fire and, all around us, the night is abuzz with the calls of the veld.

Seated at a long table, we dine with like-minded guests, on a delicious red pepper soup, followed by a perfect tender fillet of beef cooked over the coals by Dave Notten, who then regales us with his own memories of his childhood in this ethereal place.

Some hours later, replete after a superb cheesecake and with a last glass in hand, we return to the deck in front of our room as a small herd of buffalo moves through the grass below. We reflect on our day between the buffalos and the decks of Notten’s.

The word ‘hospitality’ seems inadequate for the incomparable warmth of the Notten’s experience. The magic lies in the personal approach, the history and the genuine concern with which they look after their guests.

And Joe Mathebula and Dave Notten and both of their families are at the heart of that ineffable warmth. Ten out of ten for Nottens.

Notten’s has only eight rooms, all spacious and elegant, but remember that there is no electric light. A plug-point is however provided for the charging of cameras and other equipment. A long pool allows for a bit of exercise between bountiful meals and sedentary game drives! There is also a small spa.

R3350 per person per night full board with two game drives. A winter rate of R2950 applies from 01 May to 31 August. The rate also includes a daily bush walk, cold drinks, house beers and wines plus a bag of laundry per stay. No children under 6. Children 6-12 qualify for a 30% discount.