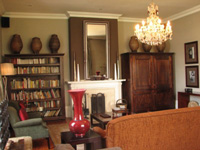 We passed the Big Pineapple but we didn’t linger. I made a note that it was 16.7m high, and therefore 0.7m taller than its paltry Australian equivalent, and we moved on in search of a pub. At the Bathurst Arms, I scribbled that, where the lawn should have been, they were apparently watering the tables in the hope that they might grow and seat more clients. I wrote about the people’s dry, spindly legs and a dry, spindly garden.

I noted that there were dream catchers hanging from the trees and raddled, tanned hippies hanging in hammocks. I think the thick, blue haze hanging on the air had begun to seep into my lungs and affect my balance. The fairy lights began to twinkle in the daylight.

But that was lunchtime. From our early afternoon arrival in Grahamstown onwards, I was so enthralled that I took no more notes. The mist cleared. The mind focused. This was Settler Country. And we were here to learn.

Fearsome Xhosa chieftains, ancient Khoi-Khoi customs, baffled British officers, priests, prophets, colonials and Boet (or was it Swaer? I had never seen a show by comedy duo Boet ‘n Swaer, so I didn’t know which one Alan Weyer was, which may have helped).

Whoever he is on the TV and in the stage shows, he is the opposite at home in the Eastern Cape, tying up the mystical and mythical threads that run deep in the region and bind all South Africans in this most inclusive and intriguing part of our shared history.

It is 1819. The Battle of Grahamstown. A crucial engagement between British forces and the amaXhosa, whose legendary leader Makana regarded by many as the founder of Black Consciousness  employs the ‘horns of the buffalo’ formation to surround the British and colonial forces, a full 60 years before it was used by the amaZulu to such devastating effect at the Battle of Isandlwana. The British squeezed a win at Grahamstown, but not an easy one. The Xhosa casualties were horrific.

Compelling yet impartial, Weyer’s voice rises and falls with the fortunes of both sides.

Around him in deck chairs, armed only with mineral water, perch 15 engrossed souls. He has given us a history of our land going back thousands of years further than our school education and now we begin to see ourselves for what we are: a remarkable people born of a tempestuous history. Whoever says history is in the past hasn’t heard Alan Weyer.

We stand and look out over one of the country’s most iconic cities, oblivious to the wind that’s howling on the mountaintops and the distant smouldering veld fires.

Instead we can all but hear the rattle of the guns and the shouts of the dying and injured.

A year after that battle and as a result of lessons learned here, the 1820 Settlers arrived in their droves to bolster the numbers. It was not going to be possible for the British to keep the amaXhosa at bay forever.

Weyer concludes: “The ongoing convergence of different cultures, African and European, centred on the Fish River, defined today’s South Africa. The Battle of Grahamstown may not have been the biggest or the bloodiest of clashes but it was probably the most pivotal. Had Makana succeeded he might just have changed the course of history completely.”

A little later, after a revitalising guzzle in a bathroom the size of my house, I lay back in an armchair in the elegant sitting-room-cum-library at Grahamstown’s No 7 Worcester Street Guest House, from which Weyer frequently operates. A glass of wine washed away the Zuurveld dust while he made historical links with our current political situation, for the benefit of the newly-converted.

The dinner menu circulated with a promise of fine steak, mashed potatoes and delicious- sounding sauces but we were all rooted to the cushions. Here in the City of Saints we were celebrating our country, listening to the spirits of the past and drinking to the spirit of the future.

We didn’t need a dream catcher to capture that vision; we had Boet (or was it Swaer?) to do it for us.

He was once a pineapple farmer but his pineapples never grew to 16.7m. In fact, they didn’t really grow to his liking at all, so he started telling stories instead.

And the rest, as they say, is history.

Tour rates: The half day Spirits of the Past tour is R895. The full day, which includes lunch in Bathurst, is R1250.

In the land of the head-turning owl, the half-brained chicken is king. Lucky the chicken is testament to this, having survived a mauling by Spooky the dog wherein he suffered a partial lobotomy. Chickens, as Lucky would probably be the first to admit, were he not even more brainless than the average, are not bright creatures and he suffers from what Ian calls motor deficiencies which cause him to peck the ground painfully about half an inch to the left of the seed he is trying to scoff. Lucky is therefore now an ‘inside chicken’, not because he is in the know or a member of a secret society, but because he lives inside and ventures outside only when Spooky is inside (and because he is part of an assisted eating programme).

This was the conversation over lunch at Ian and Katrin’s Outsiders restaurant in Nieu-Bethesda, a haven of sanity (the mental well-being of Lucky the chicken notwithstanding) in a confusing little settlement of eccentrics, hermits and late suicidals. Coming down the hill from Murraysburg, the village presents a quaint field-strewn scene in which the onlooker half-expects Amish okes in braces to be swinging from barns and wholesome giggling children to be apron-stringing their frumpy mothers as they cart around baskets of freshly-laundered linen on their hips.

A study from closer up presents a rather different reality however. Although the furrows are running, it seems that not much else is. There’s a mild smell of dagga in the air. Almost-sober locals loiter in the streets selling succulents dug from the surrounding veld and cement owls modelled on the work of Helen Martins who famously committed suicide here just over 30 years ago but whose dotty avian obsession lingers on like the speculation in London over who Jack the Ripper really was.

I just don’t quite get Nieu-Bethesda. I’ve been a few times now and on each occasion it has been dead quiet and the word on the dusty streets from the 70-odd people who live there has been that you should have been there yesterday. It was heaving and humming yesterday, they say. Today, though, it seems that the galleries and the pubs are closed and the burghers are hiding out on their smallholdings. Two minibuses from Lilyfontein School in East London are parked outside The Owl House. I wonder what the 25 pupils make of it all and next I see them predictably plugged into their iPods and wandering unhappily around the cemetery. Their two vehicles could have carried half the population of Nieu-Bethesda and along with us, the couple from Umhlanga and WANDA-WP and her husband, this quiet day has resulted in a 50% increased strain on the infrastructure.

This unspoilt valley receives somewhere in the region of 13,000 visitors a year, mostly over Christmas and long weekends, coming for the tranquillity, the heritage and the owls. It seems, like so many spots that started out similarly remote but lost their privacy, Dullstroom and Greyton spring to mind, to be a place that needs tourists, indeed survives on them, but secretly doesn’t really like them very much. The price of solitude is being overrun every now and then but when all the kyadaars have gone away the locals slip back into a deep-breathing hibernation.

Ian and Katrin moved to Nieu-Bethesda eight years ago and opened the guest house. They love it and it shows. It’s all very together. Katrin is Swiss after all so you’d expect a modicum of organisation to have crept in. Sometimes in The Karoo you just get lambed out so it was a relief when she told us that the potjie was off. We were able to avoid the countless other variations on an ovine theme and hit the very enjoyable ploughman’s lunch instead, served in colourful bowls and made up of the ingredients lining the shelves inside. Cheese, olives, pickled garlic, onions, marinated pears, excellent biltong and homemade bread washed down with a bottle of Sneeuberg, the fine local beer from The Brewery and Two Goats Delicatessen on the other side of the stream, where there are many more than two goats and where the owners appear to be growing a maze in which to lose the tourists when they become too intrusive.

We got there two days after a long weekend. Nieu-Bethesda had already transformed itself back into a ghost town of closed coffee shops and pubs, houses for sale and staring cement statues. Only Outsiders showed any sign of life at all. As Lucky the chicken would have said, it was Spooky.