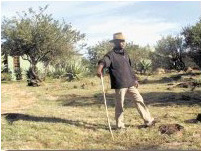 “It is good to see you in the dark,” was our cryptic evening welcome from Omri Nene, a Zulu named after a Biblical king. The original Omri became king by the choice of the people of Gibbethon after the smiting (by Omri, I think) of Zimri. It’s not a common Zulu name, but then Omri is not a common Zulu .

He is a tour guide, not of the battlefields of Judah in the ninth century BC, but of the Anglo-Boer War near Ladysmith in 1899. And he is a globetrotting actor. He had been accompanied here in the dark by the silhouettes and the barking of three baying dogs of war.

The Drakensberg can conjure up nightmarish visions of Family Fun, Bingo in the Bar and Deck Quoits, but we weren’t in the Drakensberg. We were at the nearby Three Trees at Spioenkop, where we planned to ride horses, spot birds, walk dogs and eat a lot. We hadn’t planned to go shopping or to a Drakensberg Boys Choir gig, but we did those as well.

In the best conventions of the new dispensation, Omri is a dispassionate observer when recounting the tale of the battle of Spioenkop. In our group, his version appealed just as much to the handlebar- moustached British general as it did to a couple of buzzing Pretorian youths of the De Le Rey new generation.

“I am in charge here,” he bellowed, becoming (temporarily) Lieutenant Colonel Thorneycroft. “There’s no surrender. Take your men back to hell, sir, where they came from!” It was a consummate performance.

Three Trees was once a member of the David Rattray stable but was recently taken over by safari stalwarts Simon and Cheryl Blackburn. It is now so much more than a battlefields lodge. They offer exemplary mountain hospitality without the enforced camaraderie of a big family oord.

You’ll meet like-minded guests on undulating walks followed by eclectically entertaining meal-time conversations. It’s life in the berg, bush and battlefield, to a backdrop of tasty soups and meaty roasts, not to mention a strudel that would have had Mozart asking for another coffee and a second slice, before heading for the highlands to hum a tune and walk it off.

When the mist lifts from the mountain-tops, the lodge’s views, from stoeps and baths alike, stretch over the Spioenkop Game Reserve, heaving with giraffe, eland, hartebeest and rhino. When last did you see a rhino from your bath? The horse rides have the same views but from closer up and without the bubbles.

All the lodge’s established traditions survive under the new owners. The rooms are comfortable, in period design, with quirky antique ads for Bovril and Keen’s mustard (both of which apparently kept the British troops alive in the diseased African veld just over 100 years ago).

Three days after Omri’s welcome, we bade our hosts, their hounds and our Zulu king farewell. We were no longer in the dark but enlightened. We were more than alive. Truth be told, we were as keen as mustard on Three Trees, foothill hospitality at its finest.

Where it is: In the lee of the Oliviershoek Pass, below Spioenkop, between Bergville and Ladysmith.

Why go there: Walks, talks, climbs, rides, swims, game-filled valleys. All the major walks of the Northern Drakensberg are less than an hour’s drive away.

What it has: Six en-suite rooms, one family, three dogs, one actor and a team of friendly Zulus.

We had watched the sun go down over the Sani Pass from a gyrocopter, sweeping low over the eland, the trout dams and the pilot’s ex-wife’s farmhouse, with suitable waving and taunting and had spectacularly previewed the Himeville Arms earlier from the air. Now we were headed for it by land.

An impressive array of bakkies lined the street but it seemed eerily quiet as we strode gingerly into the bar. A roar went up. The Sharks were on the attack and everyone was holding their breath in the run-up to a try. Ordering a pint of Drakensberg Pale Ale, we settled down with a menu and joined in the cheering. The chap behind me at the bar was eating steak, egg and chips out of a polystyrene container. In Himeville, it seemed, anything went.

‘We don’t serve fast food, we serve good food as fast as we can.’ Things were looking up. After days on the road of cardboard burgers, ancient sandwiches, dry muffins and that strange powdery espresso that dribbles like an illness out of the Caltex machines, good food was just what I wanted.

The restaurant was full but the talented Siphiso vowed to make a plan in two minutes. We wandered warily from the simple wooden bar through to the reception with its chintz wooden-framed chairs and its nagklokkie and its eetkamer signs embossed in black-on-white plastic and Siphiso reappeared, plan made.

Unfazed by the bombardment of questions that followed, he reassured us with the confidence that comes from being born Zulu, that the eisbein was juicy, the chips were chunky (demonstrated by an impression of a body-builder) and the trout was fresh. Well it would be wouldn’t it?

The huge stone fireplace was empty, not everyone was cold after gyrocoptering, and the walls were pale green. Here and there on the panelling an occasional kudu-head projected. The curtains were covered with leaves and in the corner was a harmonium. In the end-wall was a mysterious Hobbit-door pointing in the direction of Lesotho.

My mussels starter was in a deliciously gluey cheese sauce with bacon and brown wholewheat bread, washed down with the last of the pale ale. Then a woman, Siphiso’s mother, I liked to imagine, pulled the cork on the Railroad Red with a loud ‘thwomp’ and served the wine with all the aplomb of the finest sommelier.

The success of the Himeville Arms lies in its simplicity. We weren’t stuck in the illegible dinginess of a candle-lit dining room. The lights were on. There were candles but they were on candlesticks half a metre high, so they didn’t flicker irritatingly at you. They were above your head somewhere.

The presentation was sensible and the garnish was that great old favourite, a slice of a chunky tomato with a ring of raw onion perched on a torn-off quarter of a lettuce leaf. It was perfect. Who wants to pay extra to have all those blasted herbs and flowers thrown at their food and to have their beans tied up in a chive?

The eisbein was glorious, my dinner companion told me between rants as to the relative merits of Himevillers and Underbergers, which sounded to me like two breeds of caravan. It seems there is an ongoing rivalry between the two towns that amounts to a near-conflict. My trout had a crispy lemon butter-flavoured skin and was pink to the point of being almost orange, as only truly fresh trout can be. It was wonderful and the overcooked baby-marrow and the cauliflower cheese were exactly what I would have chosen to accompany it. Classic country cooking with certain boarding school-inspired refinements.

Unlike school, the loos were clean and reached by following signs in Gothic script. Somehow it always feels safer following a sign to the Gents when it looks vaguely Tudor. I expected a ‘Mary Queen of Scots slept here’ sign below it and loads of pineapple chunks in the urinal. I was not disappointed in the latter and, let’s face it, the former was unlikely.

We finished off with a malva pudding to rival the best in the world. My only complaint was that the coffee was not as tasty as the Caltex stuff, but it flowed better.

It was nearly 9pm. Everyone else had emptied out into the bar to celebrate another Sharks kill. We instead headed tentatively for the Hobbit door. The lights behind it were off but we could just make out a huge baronial hall, with walls of horns and skulls, and a light fitting adorned with a vast pink and white frilly light-shade suspended from the ceiling like Caspar the Friendly Ghost in bloomers. Not a Sotho or a Gollum in sight.